In a different kind of hell

Physical and emotional abuse has been a constant in Ajay Sathyan’s life. Sathyan's recount is a story of violence and degrading treatment as a Queer Person of Colour starting from the early childhood in India, faced with domestic violence and police brutality. Sadly, institutional racism is also part of the daily routine of Queer People of Colour in a white dominant patriarchal country like Germany.

I guess there’s no easy way to say that I have been assaulted, beaten, attacked, insulted, violated, abused, threatened, molested, raped… There is this impending fear that this suffering and pain will not remain a thing of the past, but a recurring horror from which I, and my fellow Queer People of Colour (QPOC) can never escape. This uncertainty of a potential attack never leaves us. Even when we’re in an allegedly safe and civilised country, the fear is real, because monsters do exist. Monsters that prey on us. Not all of us can wish upon a star for a fairy godmother or a prince. Most QPOC are at the point where we just want to be left alone. “You don’t have to be my friend, but please don’t hurt me,” sums up how I feel these days.

The first time I tried to kill myself, I was five years old. I was often abused by my parents, teachers and extended family. I was sexually abused by my aunt and later by a cousin who was a lot older than me. I couldn't explain my angst to my parents; I feared punishment, and that more pain would be inflicted on my young body and soul. That's when I happened upon a movie, where a dishevelled character hung herself. The narrator said that she was in a better place; no one would hurt her anymore. The five-year-old me, with no concept of death, attempted suicide whilst other children were playing. My misery started somewhere then and I’m yet to be redeemed.

Eventually, when I was exposed to the outside world, the violence and abuse escalated to gross sexual violence, rape and violent attacks, because I existed as me. I complained, tolerated and fought my family, individuals, and at times, groups. However I had no power against a corrupt and violent government and its police department. The police molested me, insulted me, beat me, kicked me and along with some ruffians, drugged me and raped me. They recorded their shameful act and threatened to incarcerate me for life by using it, or murder me if I spoke to anyone about it. I couldn’t go against such a corrupt system and risk my life and the lives of family members. 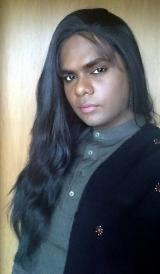 Ajay Sathyan is an LGBTQI activist, certified LGBTQI peer counselor, political artist, writer, survivor of child abuse, rape, suicide attempt and police brutality, living in Germany. In India, he was involved with organizations working for PLHIV, LGBTQI and sex-workers below the poverty line.

Ajay's life was a constant battle, surviving violence and brutality instigated by patriarchal standards and now in Europe, faced with toxic whiteness along with regressive patriarchal systems. Ajay, actively represents queer refugees/queer people of color and dialogs on topics like race, gender and sexuality, through conducting interactive lectures, workshops and discussions.

My best friends pleaded with me to leave India for a while and to stay with either one of them until the ugly mess calmed down. It was easier to apply for a visitor visa to Germany thanks to an invite from my friend and his family, rather than to the US. It was approved. I flew to Frankfurt from Dubai and was picked up at the airport by my friend. I stayed for 10 days, all the while thinking about India and the horrors that had happened to me. By the end of my stay, I wanted to apply for asylum, because I was scared of the consequences of living in an unsafe country. I applied at the nearest asylum camp, in Zirndorf.

The camp was nothing like I had imagined. It was overflowing with refugees. The staff were irritated by the influx of refugees. I had nowhere to sleep except beside a bathroom. I was all alone and was almost raped, molested, attacked, harassed and robbed by other refugees. I tried to find a psychologist or a psychiatrist, but I was told that I wouldn’t get one at the asylum camp. One of the staff members told me that if I hurt myself or tried to kill myself, I might have a better chance of being taken in at a psychiatric ward. As an activist who has worked with LGBTQI people, I knew how important mental health support was. In India, good mental health services are very expensive and hard to access. As a traumatised refugee, I was in desperate need of psychological support.

For a week I  tolerated the various problems in Zirndorf. The asylum camp staff gave me a day ticket and instructed me to move to Bielefeld. I had to make the journey from Zirndorf to Fürth, Würzburg, Hanau, Friedberg, Gießen, Siegen, Hagen, Hamm, and finally Bielefeld. I was shocked, wondering how I was supposed to manage travelling solo. The entire journey was supposed to take between nine to ten hours, but it took longer. I possessed zero knowledge of the German language, and my ticket limited me to regional transport. My phone battery was slowly dying, people were not helpful, and the trains were late, leading me to miss the connecting trains. I had to flee some very angry racists. Somewhere in between, I am not sure where, I took the wrong train and ended up in Frankfurt.

I was completely lost. In Frankfurt, I managed to find help and board the right train. From Frankfurt I traveled to Gießen, Siegen, Hagen, Hamm, and then finally reached Bielefeld just before 1am. As I was late, I had to inform the police about my arrival. They shouted at me in German. The policeman at the station was extremely aggressive, violent and racist. He spoke no word of English and kept insulting me, throwing words such as "Scheiße" at me. Once he was finished with his verbal abuse, the policeman checked my papers and put me in a taxi to the nearest asylum camp.

Later, I was moved from Bielefeld to Bad Salzuflen and back again. I was then moved to Schöppingen where I stayed for a week in a reception centre until I was finally moved to Jülich to live in a container. It was a struggle; I was constantly harassed and bullied by other refugees.

When I was transferred to Jülich,  my mobility was limited within North Rhine-Westphalia. In every camp that, I searched for a psychologist or psychiatrist. I informed the staff about my trauma and my fears, but no-one could help me, or was interested. There was no consideration for a traumatised QPOC. After two years, I managed to get a psychologist who was unfortunately insensitive and who lacked the knowledge to treat QPOCs. I tried psychiatric institutions and clinics after learning German. But, white privileged people were ignorant when it came to dealing with QPOC issues.

If I return to India, I'll be raped and murdered for being me. Staying in Germany as me forced me into loneliness, exposed me to the unkind German bureaucracy, discrimination, racism, homophobia, violence and paranoia which often drove me to be suicidal.

Neo-Nazis have attacked me for wearing my Indian clothes, ripping one of my beautiful shawls. Since then I've avoided wearing Indian clothes whenever I travelled alone.

At a party, one of my boyfriend's acquaintances said "I did not think you would bring your n*gger". It wasn't the first time I had been deemed so. Most of the white people around us don't see me as a person, but as my partner’s object, slave, thing, exotic animal. My intelligence, intellect, talents, skills, interests, pain, tragedies, feelings and emotions are irrelevant. In the end, it's all about my dark skin and their belief that I belong to a white man.

The white dominant LGBTQI scene is as insensitive and racist as the corresponding heterosexual scene. “You think you are special and holy. All the dark people are here for the money,” I have been told. Or,  “Such a brown colour, I have not f***ed. How much?” Or: “I have to have you; How much does it cost in your Indian clothes?” Or, more simply, “foreigners get out.”

These are just a few examples of what I have experienced in Germany, almost on a daily basis. I’m forced to question myself, is it worth living this miserable life?

The privileged don't understand that I'm living in a different kind of hell, that I'm constantly contemplating to live or not to live. I feel trapped, unwanted and yet forced to live. This is us, the queer or POC refugees. We're unwanted, we're trophy victims for the liberals and we're garbage and targets for the conservatives.

Still, as I write this article, I have no psychological support. Whatever therapy I had was from condescending specialists. I now have no hope of accessing good psychological help.  Queer refugees have learnt the hard way that no place is safe - even Germany is not safe for us. As queer people of colour in a white dominant patriarchal country, our very existence is a political movement. Our very existence is a threat to the far-right fanatics, racists, conservatives, bigots and Nazis.

So naturally, we will be attacked and assaulted without reason. This will be our life. This is my life. I’m battling violence and assault of some degree on a daily basis. A good mental health support system is very critical for my well-being, which I can’t afford, which doesn’t exist, and seems utopian. We are so run down and shattered that we cannot even do menial daily tasks. It may sound strange, ridiculous or funny, but trust me, privileged people would not be able to survive a week of what we QPOC go through.

Due to the lack of psychological help in the vicinity, I've ventured into treating myself through art. All my anger, rage and pain, I vent them out through painting and drawing. I’m concentrating on creating art to deal with my depression, angst and pain. I do not know what will become of me. Will I succeed and flourish, or yield and perish? I, we as QPOC, are tired ... But you (the privileged) can be the change. You can avoid walking in your ancestors' shoes. You have the opportunity to learn, understand and empathise. You can change the system. You could stop the injustice. You could make a difference. You could be an ally or an assailant. The choice is yours.

The life of a trans* activist

Alia Khannum, LGBTIQ* activist from Pakistan, shares her story as a transwoman and reflects upon her journey to become a trans* activist, engaged for the rights of LGBTIQ* refugees and migrants.
Von Alia Khannum