When the informal refugee camp of Piraeus, Greece is evacuated in 2016, the idea of an alternative housing project for and with refugees is born. Activist and journalist André Naddeo remembers the obstacles in the process of securing housing while navigating a racist society.

May 2018. Not even a week had passed since we signed the contract, when the owner of the apartment I rented called me. At that time, we were still getting used to the idea that a different concept of welcoming young Africans and, above all, of integration with local society was being established in the heart of Rome. "Look, I have something important to tell you," our landlady said, in a serious tone of voice. "The neighbour next door just called me asking 'who are these blacks who are living in your house?' I thought you should know”.

I already knew it. The offensive tone had been very clear in the five months of searches through real estate agencies, without success. It was always the same story: realtors who smiled when they learned that I intended to rent a three-bedroom apartment and had the money for a year-long contract, and then frowned when I explained the concept of the alternative housing project for young African refugees. They kept on saying: "We'll call you when we find something." I remember a realtor got to the point of blocking me on WhatsApp because of my insistence on getting an answer about possible rental properties.

The concept of an alternative housing project was born in Athens in December 2016, when the informal refugee camp of Piraeus, Greece's largest port, had been evacuated months before. That’s where more than 3,000 refugees lived for over a year, mainly from Syria and Afghanistan. I lived in this camp for two and a half months where I met incredible human beings and independent volunteers interested in working precisely to close gaps left by governments and large organizations.

Much is said about refugee children, families and the elderly. However, unattended young refugees are those particularly affected and challenged by European migration and asylum policy. In Athens, thousands of them had no alternative to living on the streets of the Greek capital after the end of the Piraeus camp. Without food, and especially with no prospects for the future, young male immigrants and refugees, who are often underage, are easily exploited by drug mafias, human trafficking and prostitution - that was the main result of a report by the FXB Center for Health & Human Rights at Harvard University.

It was at that moment that I joined the Spanish association “Holes in the Borders” to rent an apartment in Athens. The mission was clear: to give another alternative to this forgotten and easily influenced generation who would simply do anything to survive.

In July 2017, when I arrived in Rome to continue my independent volunteer work (language, video and photography lessons, besides anything else I could do to help), I found exactly the same situation. It was not long before I realized that Rome was just like Athens. Only the origins of immigrants and refugees changed: young people from sub-Saharan Africa, young Africans.

When I finally managed to rent an apartment in Rome for the social project “Planeta de Todos” (Planet of All), after a campaign on social media, I tried to select not only vulnerable profiles, but also those who really wanted to do everything possible to integrate with the local society - even if that society was racist.

There are three basic pillars to this most amazing experience of my life: learning Italian (compulsory classes), getting a job (and thus becoming independent) and volunteering (to give back for the opportunity they were given within the housing project). All of this in addition to cleaning the house and respecting the law of silence: in short, rules that we all follow when we live in community.

I currently live with Alagie (Guinea-Bissau), David (Nigeria), Salah and Adbu (Sudan), Aedy (Guinea) and Omar (Senegal). Mohanad (Sudan) and Sam (Algeria) already lived in the house, but with this "spur" decided to seek life in other countries after obtaining political asylum. We also provide legal support for these purposes.

It has already been nine months in which a South American has been living with six young African refugees – in this period, we obtained funding again from Brazilian NGO Planeta de Todos to maintain another apartment in Athens with nine young people from Afghanistan, Iran, Syria and Pakistan - this house is still part of our partnership with 'Holes in the Borders' association. Many of them have never lived in a house before - or at least in the type of home that is prevalent here in Europe.

It’s all about giving a chance. The integration process is hard and slow. It takes a lot of patience. There are thousands of young people who have never had similar opportunities in life regarding basic needs: a house to live in, a bed to sleep in and rest. We cannot pretend that the white elephant is not in the room. I remember one day when a woman left the building where we lived just as Alagie arrived. She well knows that he lives there. But she did not hold the entrance door for him. It was as if he did not have the right to share the same concrete blocks.

As long as this concept of superiority exists, the human project will continue to fail. There isn’t another option for us as activists, volunteers, human beings than to resist. 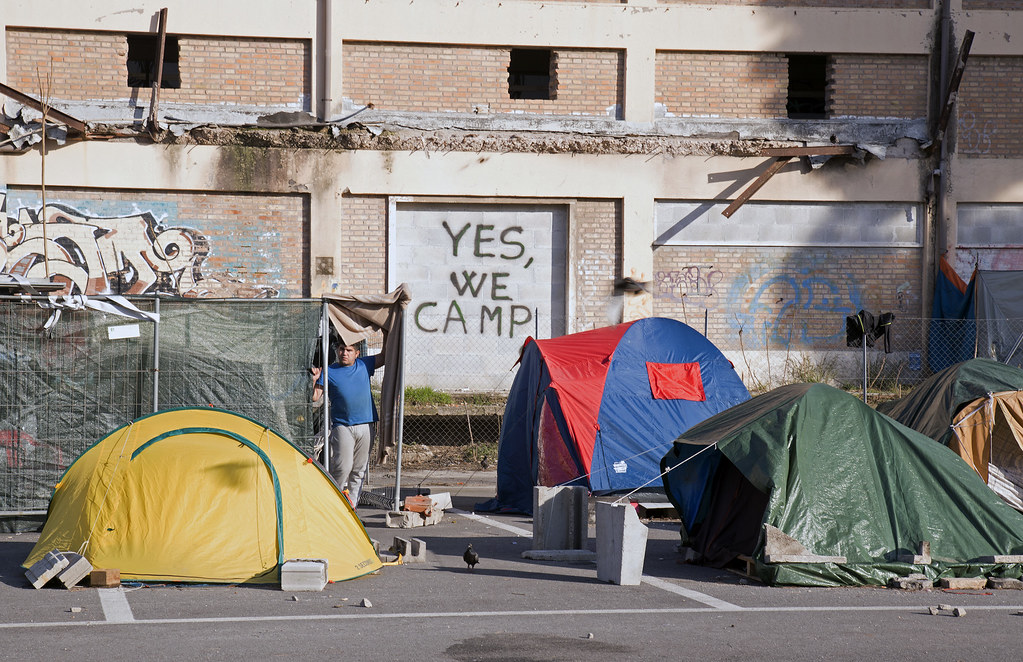